Joe Crane Wisdom of the Angels 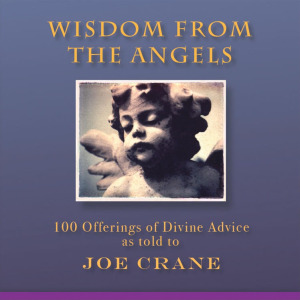 Wisdom of the Angels

by Joe Crane and the Angels

This is the big little book of over 100 quotes from more than a decade of Joe’s visits with the Angels. This is a book for everyone, just the quotes and without metaphysical commentary. It is a carry-anywhere, 4″ square book with introductions and reviews. These make great gifts.

Here is what people are saying about Wisdom of the Angels:

“In Joe Crane’s Wisdom from the Angels we are given words of calm, love and reassurance. It is a beacon of light in the darkest storm.”

“Joe Crane’s Wisdom from the Angels is an inspiring, daily reminder for each of us on our path. Intriguing, thought provoking, and filled with brilliant insight. A must read!

Julia “Jewls” Hanson, author of Awakening to Your Creation

“Went to PO Box today to pick up the Wisdom from the Angels book. It arrived safely. Opened it up, read a few angel quotes and it brought tears to my eyes. The remembrance of reading the quotes from the visits and remembering what we have gone through to get to the point where we are at today touched me. It will be of great assistance to stay on task for those days when we need a little pick me up.”

Joe’s Introduction to the book:

“I’ve been visited by angels for 15 years and they have had a lot to say. They can reveal profound information with just a phrase. Occasionally, one of these tidbits pops into my mind at just the right time. I got to thinking that these phrases could be of value to everyone. The angelic quotes in this book can help keep us on our spiritual path. When something is bothering me, I go to the quotes and find just what I need. Angels have been spoken of ever since stories have been told. People throughout the world attest to seeing angels. There are more stories of people seeing and getting messages today than any other time in history. There are more people who have seen an angel or had an angel touch their lives than you may think. I know you picked up this book for a reason and it is not by accident. Just like me, you want to know for sure if angels are real. Over 18 years ago I found the answer to my question. Yes, angels are real. What you don’t know is there have been angels working in your life for a long time. Angels have been there for you when you were helped by a stranger in a time of need. Angels have given you comfort in words of wisdom and you didn’t even know it.

The first time I ever heard an angel was many years ago and that voice saved me as well as the others who were with me. I was stationed on the aircraft carrier U.S.S. Forrestal during the Vietnam War. On July 29, 1967, I was in a compartment with several other men who had worked all night, trying to catch some sleep before the next shift. An airplane on deck misfired a missile and it struck a fuel tank on a plane and exploded. After the initial explosion, the bombs started to cook off and explode, opening the deck. Bombs fell through the holes and down through the ship’s nine levels, killing as they exploded. The ship’s cabins and corridors were filled with thick smoke and we were trapped until I heard a voice that said, “Come this way if you want to live!” I followed that voice along with the other crewmen in my quarters to safety. I never met who was behind that voice until 30 years later. But that, my friends, is another story. My life has had its ups and downs, but through these years, the angels Michael, Gabriel and others have blessed me with philosophical insight, tools for healing and visions of what is to come. It is up to you to explore these pages and find what is true for you.”

On rare occasions a revolutionary book comes along that changes everything. This is the breakthrough you have been waiting for. The simplicity and power of Manifesting 123 is breathtaking and readers are reporting wonderful and sometimes spectacular results.

Manifesting 123 has re-invented manifesting with new and basic information you haven’t known before. This is the go-to manual for creating the life you desire. Manifesting 123 is unique because it clearly illustrates how our thoughts actually begin to take form on the other side and flow into our physical world.

Ken reveals a number of first-hand experiences creating simple to complicated objects in thought that were viewed by others 2,400 miles away – in real time.

No more guessing whether or not your intentions are creating the intended result. Ken clearly describes how your thoughts begin to build by taking form immediately. This changes everything.

I LOVE your stories….so empowering to know you can use the science of manifesting through intention. Brilliant.

Ken Elliott has a great idea, easy to implement and I’m having fun playing with the concept(s) he introduced in this book. Well worth the purchase!

This book is a wonderful ‘how to’ recipe for those new to manifesting and for those who have been practicing other methods for years. The author lays out the steps to his simple yet powerful approach in an easy to read format. The stories he includes, which illustrate the manifesting success that he and others have achieved with this method, are not only fun and inspiring but show that we all can do this too! Just as the title indicates, manifesting really can be as easy as 1-2-3!